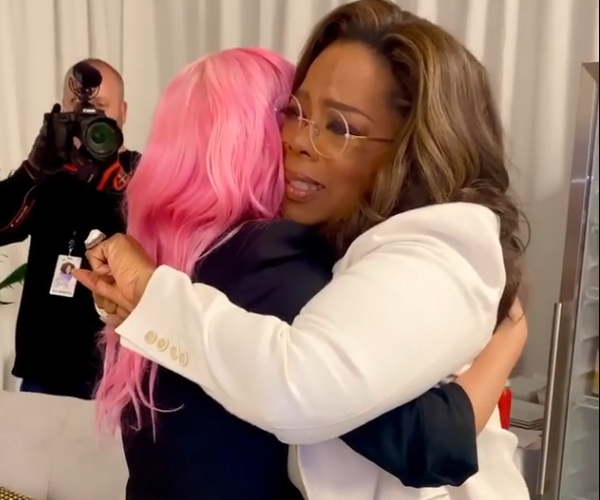 + the Haus Of Julia meme

Then on the 5th Oprah posted an Instagram backstage clip.

A day goes by and on the 6th

Oprah Magazine acknowledged the traction of the clip branding it a viral meme.

My initial reactions to the phenomenal interview between two powerhouse brands hide among the internet comment section. And the one I do have a record of has adult language. I originally made this latest remake of JuliaClark.org for my mom; thus, we are going to spare the adult language from the article, so the link to one of my first reactions is here. It is an exciting read. I used the interview as a leap into a prison reform post and used the moment to speak out against inappropriate workplace behavior and sexual harassment.

John Oliver!
Your opening clip at 1:50 about Oprah is inappropriate.
And you know, I cannot say it is wrong. However, you do not get to exploit her story. However, I absolutely know you also did it for the clicks, most likely hoping to get called out on it in a big way to rank the very important story about prison labor to more views. I did not share this sooner because of your exploitive use of Oprah’s story. She will discuss her comet relationship, look it up, with that which cannot be named, when and if, she is ever ready.
(っ•́｡•́)♪♬ Blow, Oprah, blow. (っ•́｡•́)♪♬
It does not matter that I am still perturbed about Oprah’s expectations of free labor from performers for “exposure,” specifically a Hula Hoop performer, during Oprah’s previous tour. It is not okay to tell Oprah’s #truths with the literary device of allusion.
However, Oprah Winfrey is leaping and bounding onto a new tour. And her first guest was Lady Gaga.
And Oprah mentioned she was nervous about asking JoAnne to be her first guest.
And I snarkily thought, “Ha! you probably didn’t offer show-up fee and that’s why you got the hypersensitivity.”
And JoAnne said to Oprah,
And I quote, “In an industry where everyone has some [inaudiable] on each other. So no one wants to help you out. No one wanted to help me. me go after that person to put that person where they belong, which is jail.”
And Oprah saying before that statement to have “that life” you have to accept it all, including the rape, then after the statement directing the conversation to the loneliness of it all.
And there you were like a brilliant orb…

The interview was genuinely moving. I watched it before WW, formerly Weight Watchers, put it on their Youtube Channel. I missed one small section of it because of a battery change, so I have to rewatch it.

One of the things Oprah points out is Bradly, and Gaga’s love was so convincing, however, intentionally done “because they are actors.” So the clip that the Haus of Julia pulled might have been staged from a staged event. Medical notation, one of my seizure triggers, is when a woman asks me a question.

Somewhere on the internet, one of my first reactions, I pointed out that Oprah seems enraged twice on the original backstage video from the audience’s view. That the Haus of Julia’s clip only shows Gaga’s perspective. Seeing such a powerful woman shake Joanne AND viewing Oprah storm through backstage bellowing, “Where is she? Where is Gaga?” was a trigger for me from which it took a day for me to recover. Writing this now, and realizing that Oprah videotaped this for production and publication, I radically accept that it was indeed a staged encounter.

Gaga shared that she has fibromyalgia and how it is related to unprocessed trauma. And I wholeheartedly agree. I also am going to take it a step further, which I will explain in another article. Still, briefly, my symptomology that is relieved by B12 injections sometimes correlated directly to physical trauma I experienced and have not processed.

Gaga is correct; there is a mental health crisis. We lose more veterans to suicide than to war. Oprah indeed showed and interest in learning about mental health. I was surprised by Oprah’s naivety about trauma.

Oprah blundered and stated, everyone wants fame. She also slips in the interview stating the recognition package includes rape. No Oprah, not everyone wants to be famous, but more importantly, rape should not be a requirement. Oprah really must come to terms with what went down. Arguably Oprah is one of the most powerful women of the world, arguably Weinstein WAS one of the most powerful men in the world. Furthermore, Epstein did not kill himself.

Gaga goes on in the interview on how doctors and medications do help. And they do, my adventure, of course, is different than hers. And we all have different experiences to some extent or another. I chose medical doctors at this point in my journey, primarily due to my brain tumor. I am also in counsel, learning how to talk about my trauma. I have PTSD, at times deeply depressive states, pernicious anemia, and the brain tumor.

Gaga goes on to list and describe some of her therapies and tools. She repeatedly speaks of radical acceptance. And each time she says it, I am kind of bewildered. If you have radical acceptance, what is unradical acceptance? One of the ways I learned the language in 2004 was by carrying around a thesaurus. This audience may not know that I lost most of my memory in 2004, which included learning to read, write, walk, and talk. It was a challenging time that I overcame.

Oprah asks what took the longest to learn, and Gaga smoothly transitioned into the reply, “Wisdom.” She explained that wisdom centers between an emotional state and a logical state. To paraphrase; Thinking logically with compassion, or whatever is the appropriate emotion to be paired with the event.

Gaga goes on to describe her psychotic break, spirals, disassociative states. She elaborates that she started with doctors, and they brought in a shrink. Mine was the opposite; my psychiatrist told me I had to go to the doctor.

I think one of the sweetest moments was when Oprah shares personal experience with Luke, her dog. It was a moment of bravery for Oprah. It was a time where Joanne moved Oprah closer to the radical acceptance chair.